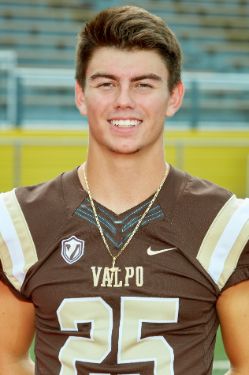 2017: Played in 10 games and made six starts as a freshman… Made his collegiate debut in the season opener at Montana before his first career start came in the home opener against Duquesne… Shared the team lead with three interceptions, becoming the first Crusader since Josmar Diaz-Martinez in 2015 with three interceptions in a year… Ranked second among PFL freshmen in interceptions, behind only Dayton’s Tim Simon, who had four… Had a season-high six tackles on two occasions – Sept. 9 vs. Duquesne and Sept. 30 vs. Stetson… Finished with 33 tackles, 3.3 per game, which ranked seventh among PFL freshmen and led Valpo freshmen… Had 19 solo tackles and two tackles for a loss… Made his first career interception on Sept. 9 against Duquesne and returned it 12 yards… Also had interceptions in home wins over Marist (Oct. 14) and Morehead State (Oct. 28)… Had his first career fumble recovery on Oct. 14, a 49-15 win over the Red Foxes.

Personal: Born on Jan. 8, 1999... Son of John and Fanny Scargle... Has one younger brother, Nicholas... Enjoys watching and playing sports, going to the beach, going to the movies and bowling... Majoring in criminology/sociology.