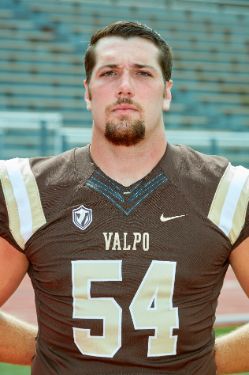 2017: Played in two games before suffering a season-ending injury... Had four tackles in the season opener at Montana on Sept. 2.

2016: Played in three games and totaled three tackles as a sophomore... Had two tackles on Sept. 3 at Illinois State... Played in each of the first three games of the season.

2015: Appeared in nine games in his rookie year at Valparaiso ... finished the year with seven tackles, including four solo stops ... debuted with one tackle Sept. 3 at Eastern Kentucky ... registered season-high two tackles Sept. 12 versus Sacred Heart and Nov. 21 at Jacksonville ... also picked up a tackle Sept. 26 against San Diego and Oct. 17 versus Dayton.

Prep: A four-year letter winner for the Lancers...earned First Team All-Conference honors and Second Team All-Region accolades as a junior...named Second Team All-District, First Team All-Conference and served as team captain his senior season...holds the school record for the deadlift (675 pounds)...also lettered all four years in track and field...was a sectional qualifier in the 4x100 meter relay his senior year...member of National Honor Society...an 8-time First Honors-Honor Roll Awardee...named Student of the Month...received departmental awards for Social Studies and Health and Wellness, awarded to students who show dedication and progress above the ordinary in and out of the classroom.

Personal: Jesse is the son of Terry and Karen Studyvin... Majoring in business management.