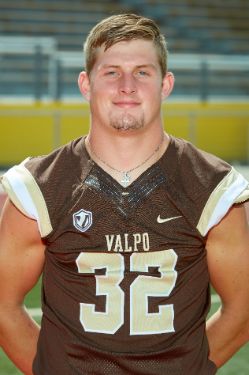 2018: Finished second on the team with 264 rushing yards on 74 carries… Tied for the team lead with four rushing touchdowns… Averaged 37.7 rushing yards per game and 3.6 per carry over seven appearances… Enters his senior year with 17 career rushing touchdowns… Added six catches for 62 yards during the season… Rushed for three touchdowns on Oct. 13 to help Valpo to a victory over rival Butler. That was the second straight season he rushed for three scores in a game after doing so against Trinity International in 2017. He became the first Valpo player to rush for three touchdowns against a Division-I opponent since Jake Hutson on Sept. 27, 2013 against Campbell… Had season highs in rushing yards (68), receiving yards (43), carries (four) and all-purpose yards (111) on Oct. 20 at Morehead State… Had a 1-yard TD run in the season finale on Nov. 17 at Stetson... Valpo was 2-0 in games where Boxrucker scored a touchdown… Member of the PFL Academic Honor Roll.

2017: Played in 10 games during his sophomore season… Had seven rushing TDs, the 10th most in the PFL and the most on the team… Totaled 292 rushing yards on 69 carries… Scored two TDs in his first game of the season on Sept. 9 vs. Duquesne before reaching the end zone three times on Sept. 16 at Trinity International, becoming the first Crusader since 2013 to rush for three touchdowns in a game… Scored one TD on Oct. 7 at Campbell and another on Oct. 14 vs. Marist… Ran for a career-high 89 yards on Oct. 28 vs. Morehead State, including a long of 34.

2016: Was an immediate contributor as a freshman, playing in all 11 games... Ran for 135 yards and seven touchdowns on 46 carries... Led the PFL in rushing TDs among freshmen... Had the most TD runs of any Valpo freshman in the last decade... During the 2015 and 2016 seasons, no other Crusader had more than two rushing TDs in a single year... Had six carries for 12 yards in his collegiate debut on Sept. 3 at Illinois State... Scored his first career TD in his Brown Field debut on Sept. 17 against Trinity International... Had a pair of two touchdown games - Sept. 24 vs. Davidson and Oct. 15 at Stetson... Ran for a season-high 28 yards on Nov. 5 at Dayton... Member of PFL Academic Honor Roll.

Personal: Son of Matt and Tiffanie Boxrucker ... majoring in finance.