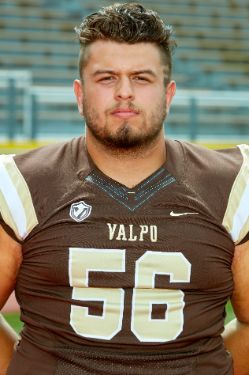 2016: Played in 10 games and made 24 tackles - 13 unassisted and three for a loss - and recorded one sack... Set a career watermark with five tackles on Nov. 5 at Dayton... Also picked up the first sack of his collegiate career in the game against the Flyers.

2015: Appeared in all 10 games for Valpo during his sophomore campaign ... tallied 17 tackles, including nine solo stops ... also had two pass breakups ... registered season-high four tackles in back-to-back weeks - Oct. 10 at Drake and Oct. 17 versus Dayton ... all four of his tackles against Drake were solo tackles ... made three tackles against Stetson Oct. 24.

2014: Played in all 12 games in his rookie campaign with the Crusaders...racked up 16 tackles on four QB hits on the season...recorded two tackles at Western Illinois (Aug. 28) in his collegiate debut...logged two QB hits versus St. Joseph's (Sept. 6)...made two stops and a notched a hit on the QB against Butler in the Crusaders' 17-3 victory at Brown Field on Nov. 8...amassed a season-high six tackles - three solo - including one for a loss at San Diego (Nov. 15).

Prep: A four-year letter winner for Frank Mazzota and the Highlanders...compiled a 40-11 prep record including a CIF Freeway League Championship...voted All-Area, All-League and a National Football Federation Scholar Athlete his senior season...second in school history for sacks in a season (12), tied school record for most sacks in a game (3)...also lettered twice in track & field and earned two league silver medals in shot put...recipient of Scholar Athlete Award all four seasons.