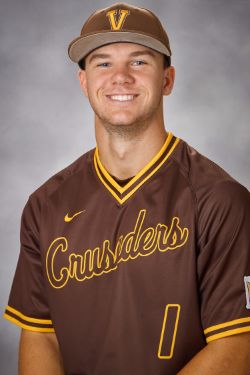 2018 (Summer Ball): Played for the Martinsville Mustangs of the Coastal Plain League during the 2018 summer season. He led the league in batting average at .395 and was named to the All-CPL First Team and the CPL Select Team that competed against the USA Collegiate National Team in a midseason All-Star Game. The Mustangs coaching staff featured former Valpo player Dustin Beasley.

2018: Started all 53 games while compiling a .265 batting average and .341 on-base percentage as a junior. Led the team with 10 stolen bases in 12 chances, clubbed three home runs after hitting none in his first two seasons, had five of the team’s seven triples and drove in 28 runs, also a career best after having 15 in 46 games in 2017… Led off and started at second base for every game all season… Became the first Valpo player with five triples in a season since Kyle Gaedele in 2010… Led The Valley in triples… Was cut down trying to steal in each of the first two games of the season, but went a perfect 10-for-10 on stolen-base tries the rest of the season… After launching his first career home run on Feb. 24 at Oklahoma, ripped a two-run blast in the top of the ninth inning on March 2 against CSUN, capping a miraculous nine-run ninth that tied the game at 13…Set a career-high with five hits in the March 2 game against CSUN, becoming the first Crusader since Nolan Lodden on March 20, 2016 to rack up five hits in a single game. He homered twice in a four-game span after having no home runs in his first 332 career at-bats…Hit a grand slam against Arkansas Pine Bluff on March 16… Had his hottest stretch of the season from March 7-March 23, recording multiple hits in seven of his eight games.

2016: Played in 52 games a rookie, including 49 starts at second base...batted .253 with a .355 on-base percentage...recorded his first collegiate hit at New Orleans on Feb. 27, when he started a span of 17 hits over his next 16 tilts...scored a season-high four runs as part of a 2-for-5 night at ULM (March 2)...went 3-for-6 with an RBI and three runs scored in Valpo's 16-1 victory over Northern Kentucky (March 20) that completed a three-game sweep of the Norse...worked seven walks over a four-game span, including four in a doubleheader versus Milwaukee (April 3)...drove in a season-best three runs as part of a 3-for-5 contest versus Chicago State (April 26)...embarked on a 5-for-10 tear from May 15-20, a stretch that included four RBIs, two runs and a stolen base...was named to the Horizon League All-Tournament Team following a 6-for-16 week in which he crossed the plate eight times, ripped two doubles, a walk, an RBI and a stolen base...elected to Horizon League All-Freshman Team.

Prep: A two-year letter winner for head coach Dave Pishkur and the Andrean Niners...member of two State Championship teams (2013, 2014) that went 31-6 both seasons...made Defensive Play of the Year his junior year and made Offensive Play of the Year his senior season...recorded the second-most hits in a season in school history...also earned three letters in soccer and one in football...was a runner-up at the State Championship...named to B Honor Roll.