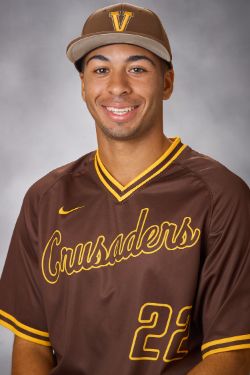 2020: Led the team in batting average at .311 while starting all 16 games during the COVID-19 shortened season… Had a team-high 19 hits, tied for the club lead in RBIs with seven and was second on the squad with seven runs scored… Tied for the team lead with three doubles while also launching one home run and ranking second among Valpo players with 11 bases on balls… Led the team in both slugging percentage (.410) and on-base percentage (.417)… Collected three hits on two occasions – Feb. 16 at Western Kentucky and Feb. 29 vs. Southern Miss… Had six multi-hit games… Launched his first career home run in a Feb. 17 win at Western Kentucky… Collected a season-high three RBIs on March 10 at Alabama State.

2019: Received All-MVC Honorable Mention Recognition… Appeared in 47 games and made 46 starts… Batted .290 with five doubles, two triples, 23 walks and 11 RBIs… Had a breakout season after entering the year with a .207 career average through his first two seasons… Moved to the leadoff spot and transitioned to centerfield for his junior campaign… Set the tone atop the lineup with three hits, three RBIs, a walk and two runs scored in Valpo’s first victory of the season, which came 8-6 over Lipscomb on Feb. 16… Had his fourth multi-hit game of the season on March 9 at No. 25 South Carolina… Had two doubles in a March 17 win over Northern Illinois, becoming the first Valpo player with a two-double game in 2019 … Had hits in all three games of a weekend series against Butler March 23-24, extending his hitting streak to seven. Ripped a run-scoring triple in the middle game of the series to help Valpo to a 5-2 win… Moved his hitting streak to eight with his second triple of the season on March 27 at Ball State… Had three of his team’s five hits on March 30 at DBU while also making an impressive catch in left-center… Drove in Valpo’s only run of the game on March 31 at DBU with a sacrifice fly. Saw his hitting streak come down to the top of the ninth in that game, when he received an extra at-bat thanks to a Steven Fitzsimmons single earlier in the inning and took advantage by roping a single to center, hitting safely for the 11th straight game, Valpo’s longest hitting streak of the season at that point. That streak was snapped on April 5 vs. Illinois State. He batted a team-best .395 during that 12-game stretch (that saw Dent play in 11)…. Bounced back from seeing the streak snapped with multi-hit showings in both games of a doubleheader with the Redbirds on April 6… Had his team-leading 11th multi-hit game of the season in the series finale at Indiana State on April 13. .. Closed the regular season with his 15th multi-hit game of the year on May 18 at Missouri State, remaining in a tie for the team lead in multi-hit outputs.

2018: Played in 31 games and made 27 starts as a sophomore… Had two hits on three occasions, including March 30 in the second game of a doubleheader against Bradley… Played a key role in a dramatic 3-2 win over Chicago State on May 15 that saw Valpo score twice in the bottom of the ninth to win it. Had a 2-2 count as a pinch hitter with two outs and nobody on base with Valpo down 2-1, then ripped the seventh pitch he saw into center for a base hit, starting a two-out rally.

2017: Played in 38 games and made 26 starts during his freshman season... Drove in seven runs while batting .206 with one double... Made his collegiate debut on Feb. 19 against Western Kentucky... Notched his first collegiate hit on March 8 vs. Penn... Had a season-high three hits on April 8 against Northern Kentucky... Doubled against Oakland on April 15 for his lone extra-base hit of the year... Robbed Milwaukee's John Boidanis of a home run with a leaping catch on May 13 at Milwaukee.