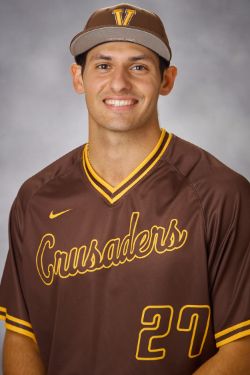 2017: Ranked second on the team in batting average at .302 while seeing action in 47 games and making 43 starts... crushed five home runs and drove in 32 to share the team lead... slugged .488 while posting a .366 OBP... scored 25 runs and went a perfect 5-for-5 in stolen bases... Ranked second on the team in league-only average at .330... Entering the game against Northern Kentucky on April 9, was hitting .213 with no home runs and eight RBIs in 26 games this season and was a career .204 hitter over three years. From that point forward, he hit .380 with five home runs and 24 RBIs over the final 25 games of the season... Ripped two doubles in a midweek game at Notre Dame on April 25, then hit .583 with three doubles, a home run, six RBIs and 13 total bases in a three-game set at Youngstown State April 28-30. That performance earned him the Horizon League Batter of the Week award on May 1, becoming the first Crusader to garner the honor in 2017.

2016: Appeared in 24 games, including six starts...launched a grand slam versus Purdue North Central (April 25) before driving in another run later in a 17-6 Crusader victory...doubled and drove in three runs in Valpo's 8-6 win over visiting Illinois State on April 5...accumulated eight RBIs and seven runs scored on the season.

2015: Named to Horizon League All-Freshman Team after scoring six runs and driving in seven in 24 appearances in his rookie campaign...collected his first career hit against Youngstown State on March 21...enjoyed a 2-for-3 day with three runs batted in at Oakland (April 25)...launched his first career home run against Milwaukee, a two-run shot on May 3...scorched a pinch-hit single and later scored against Purdue (May 12)...compiled a .366 on-base percentage while establishing himself as one of the team's top defensive outfielders.

Prep: A two-time letter winner for Gary Remiker and the Dons...led his team in batting average, on-base percentage, home runs and slugging percentage as a junior while the Dons were voted preseason No. 1 in the country...named First Team All-Eastern League as a senior in 2014 in addition to claiming the Coaches' Award...recipient of the Kevin Madden Award...named to the Honor Roll...teammates with Brady Aiken, the No. 1 overall pick in the 2014 Major League Baseball draft...was also a four-time letter winner in soccer and lettered in football once...named Second Team Western League in soccer his senior season...played on the Italian National Baseball team in three World Championships (Korea and Taiwan twice) and winner of two European Championships.... named Most Valuable Player at the U18 European Championship... hit an inside the park grand slam in the final.