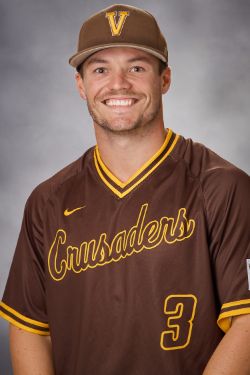 2017: Appeared in 26 games and made 18 starts in his first season as a Crusader... Batted .217 with two home runs and 13 RBIs while picking up three doubles... Drove in his first run in a Valpo uniform on March 3 at Jacksonville, then notched his first career hit in that same series a day later... Swiped his only base of the season on March 3 at Jacksonville... Had three multi-hit performances - March 7 vs. Penn, March 19 at Wright State and March 21 at Chicago State... Posted a season-high three RBIs on April 30 at Youngstown State, a game in which he nailed a three-run homer in the top of the ninth inning that proved to be in the difference in a 10-7 Valpo win... The long ball was Eggimann's first as a Crusader... Made it home runs in back-to-back games when he drilled a two-run blast on May 3 vs. Northern Illinois.

Central Arizona (2016): Went the junior college route and played for the Vaqueros during the 2016 season… Stole 18 bases (including two steals of home) in 53 games while also scoring 48 runs… Central Arizona plays in the Arizona Community College Athletic Conference.

Grand Canyon (2015): Spent his freshman year playing for Western Athletic Conference champion Grand Canyon… Played in 23 games and made three starts… Hit a home run in the first at-bat of his collegiate career.

Summer ball: Hit .377 in 24 games while spending the 2016 summer season in Wellington, Kan. with the Wellington Heat of the Jayhawk Collegiate League… Played in 25 games with the Chillicothe Mudcats of the MINK League in 2015.

Personal: Son of Matt and Tami Eggimann… Interests include fitness and action sports… Was an expert BMX rider by age 5 and was featured in a biking magazine… Favorite food is Italian… Favorite movie is Never Back Down… Favorite professional baseball team is the Kansas City Royals… Favorite MLB player is Bryce Harper… Favorite Musical Group is Blink-182… Born on Sept. 6, 1995… Majoring in entrepreneurship in health and wellness.