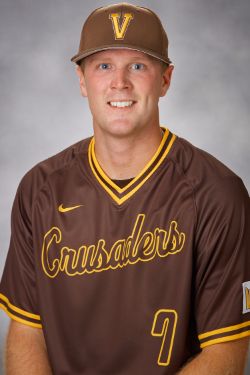 2018: Played in 14 games and made seven starts for the Crusaders… Made his Valpo debut on Feb. 18 with one at-bat at Alabama before getting his first career start on Feb. 24 vs. Holy Cross, a game that saw him draw three walks. Picked up his first Valpo hit, RBI and stolen base on March 2 vs. CSUN… Had his lone multi-hit game of the year on March 11 at LMU, also doubling for his lone extra-base knock of 2018.

2017: Sat out due to injury... Received a medical redshirt and retained two years of eligibility.

Prep: Three-year letter winner Ankeny Centennial… First-team all-state and first-team all-district in 2014… Second-team all-conference in 2013… Broke school’s all-time single-season records for hits, batting average and doubles… Also a three-year letter winner in football and basketball… Honor roll all four years of high school… Batted .419 with five home runs and 31 RBIs in 2014. Also pitched and struck out 22 in just 12 innings of work. Was the only player on the team to start all 41 games.

Personal: Son of Scott and Teri Jones… Favorite food is a cheeseburger… Favorite movie is Four Brothers… Favorite professional baseball team is the Chicago Cubs… Favorite MLB players are Javier Baez and Kris Bryant… Favorite musical group is Eminem… Hobbies include golfing and being at the lake… Born on Nov. 3, 1995… Majoring in secondary physical education.