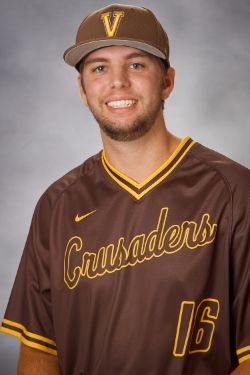 2020: Made seven relief appearances during the COVID-19 shortened season… Struck out 14 and walked five in 8 2/3 innings… Had three or more strikeouts in three of his seven outings including a two-inning stint of scoreless ball in his Feb. 16 season debut at Western Kentucky… Did not allow a run on Feb. 21 in his inning at No. 3 Louisville… Worked 1 2/3 scoreless frames and permitted just one hit while notching a season-high four strikeouts on March 11 at Alabama State, his final outing of the season.

2019: Saw action in 18 games out of the bullpen while logging 26 1/3 innings… Finished second on the team in ERA while nailing down three saves… Put together a stretch of 9 2/3 scoreless innings over six straight scoreless outings in late April and early May… Received his first win of the season thanks to 1 1/3 shutout frames without allowing a hit in a 4-3 victory over Chicago State on May 14… Allowed no hits and just one walk over three scoreless innings while striking out four on May 18 at Missouri State… Bounced back well after missing the entire 2018 season and the end of the 2017 season due to a UCL injury and undergoing Tommy John surgery.

2017: Was dominant out of the Valpo bullpen before an injury on April 21 cost him the rest of his season... Appeared in 16 games and compiled 28 innings while striking out 22 and walking eight... Posted a team-best 1.61 ERA... Narrowly reached the minimum 25 innings required for team leadership in ERA... Posted the best ERA of any Crusader since 1987 (Tim Holmes, 1.59)... Strong season came after holding a 7.24 ERA his freshman year... Had a stretch of 16 1/3 consecutive scoreless innings from March 4 to April 4... Worked four scoreless innings in his only start of the year on March 8 vs. Penn... Picked up his first career save on March 21 at Chicago State.

2016: Made eight appearances as a rookie, including three starts...finished the season 1-0 with a 7.24 earned-run average...fired a scoreless inning of relief in his collegiate debut at Jacksonville State (Feb. 21)...threw another shutout frame at New Orleans (Feb. 26) the following week...made his first career start at ULM (March 2), and lasted three innings, striking out a pair... surrendered two runs in four innings as he earned the win over Purdue North Central (April 25).

Personal: Montana is the son of John and Lori Quigley...has three younger sisters: Leyna, Grace and Jenna...favorite food is pizza...favorite movie is Dumb and Dumber...favorite musical group is Blink 182...favorite baseball team is the San Francisco Giants...favorite baseball player is Madison Bumgarner...hobbies include ping pong, listening to music, going to the beach and playing ukelele...majoring in marketing with a minor in psychology.