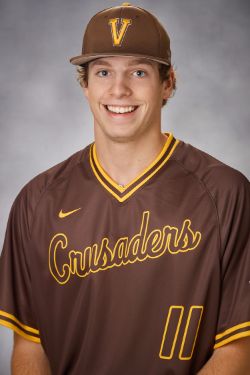 2020: Made one appearance in the COVID-19 shortened season, allowed no earned runs on one hit and one walk in the March 8 game at Georgia Southern.

2019: Appeared in 10 games and worked 10 2/3 innings during his sophomore season… Worked a scoreless inning and struck out two on March 24 vs. Butler… Heaved two scoreless innings against Evansville on April 26… Helped protect a late lead with a scoreless eighth inning in a 4-3 win over Chicago State on May 14.

2018: Was the only freshman who saw action for the 2018 Crusaders… Made two starts and three relief appearances… After debuting with an inning vs. Holy Cross on Feb. 24, made his first start on March 6 at UC Riverside… Best outing of the year came in the second game of a doubleheader on March 11 at Loyola Marymount, when he worked a scoreless inning and struck out the side while allowing no hits and one walk.

Personal: Sister Kayla is on the Valpo volleyball team... Born on Nov. 12, 1998... Son of Doug and Sue Currier... favorite rapper is Kanye West... Enjoys reading and fishing... Majoring in nursing with a minor in psychology.