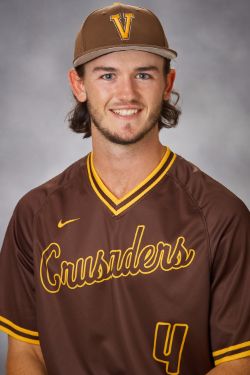 2018: Saw action in 19 games and made eight starts as a junior… Became part of a designated hitter platoon late in the year, making eight starts over the final month of the season after getting his first starting assignment on April 25… Had a pair of multi-hit games – April 11 vs. Milwaukee and May 4 vs. Missouri State… In the May 4 game against the Bears, he also drove in two and swiped a base. He led the way that day against the conference’s top team as the only Crusader with multiple hits in a 6-5 Valpo defeat.

2017: Appeared in 16 games and made 12 starts during his sophomore season... Collected seven hits and drew seven walks... Had career bests in both hits and runs scored with three of each on March 8 vs. Penn.

2016: Made 18 appearances in his rookie campaign with the Crusaders, including five starts...emerged as a reliable bat off the bench as he hashed out a .280 batting average and a .379 on-base percentage in 25 at-bats...registered four runs and three runs batted in on the season.

Prep: A three-year letter winner for head coach Ross Giusti's Knights...earned All-Mid-Suburban League accolades his junior year in addition to Honorable Mention All-Area honors...voted All-League again as a senior while being named All-Area...integral part of a team that tied the school record for wins in a single season...member of National Honor Society.

Personal: Patrick is the son of Tim and Mary Donohue...has a brother, Kevin, and a sister, Eileen...favorite movie is Good Will Hunting...favorite food is pizza...favorite baseball team is the Chicago Cubs...favorite player is Addison Russell...hobbies include ping pong and video games...majoring in finance.