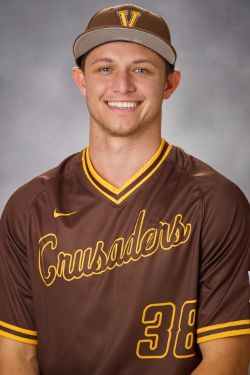 2017: Had a strong junior season that saw him finish with a .291 batting average in 34 games, 33 starts... Had 12 extra-base hits including three home runs... Swiped two bases and worked 18 walks... Missed time early in the season with a wrist injury then missed the end of the season with a concussion... Had multiple hits in four of his first six games of the season... Matched a career high with three hits in five games - March 29 at Purdue, April 8 vs. Northern Kentucky, April 13 vs. Oakland, April 15 vs. Oakland and April 21 vs. Northern Kentucky.... His five three-hit games were the most of any Crusader... Batted second in the order in 32 of his 33 starts.

2016: Appeared in 15 games - 14 starts - during an injury-riddled sophomore campaign...collected 11 hits - three doubles - and seven runs scored in 43 at-bats...laid down the game-winning squeeze bunt in his season debut in Valpo's 5-4 win over Northern Kentucky on March 18.

2015: Named to Horizon League All-Freshman Team after batting .272 with six doubles and 14 runs scored in his rookie campaign with Valpo...played in 29 games including 24 starts on the infield...made his collegiate debut at San Diego State on Feb. 13...recorded his first career hit at Gardner-Webb (March 1) as part of a three-knock afternoon... missed six weeks with a hip flexor injury...returned with a vengeance at Oakland (April 25-26) to assemble a 5-for-11 series with a pair of doubles, two runs scored and two runs batted in.

Prep: A three-time letter winner for Tim Murray and the Warriors...was a two-time All-Pacific Coast League and All-City Irvine Team member (junior and senior seasons)...elected to the North vs. South Orange County All-Star game his senior year...recipient of the Ryan Lemmon Award in 2014...named to President's Honor Roll.