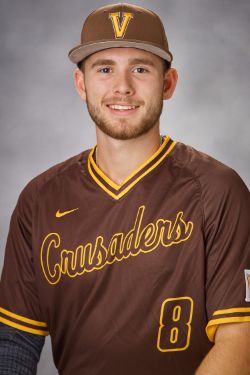 2017: Started 52 Valpo's 53 games during his sophomore season... Had an improved offensive season, batting .268 with one home run and 29 RBIs while racking up 48 hits, 10 of which went for extra bases... Threw out 41.5 percent of would-be base stealers... Lone home run of the year came in the season opener on Feb. 17 at Western Kentucky, a three-run blast in the top of the second. The three RBIs in that game equaled a career high... Showed his versatility on March 31 against Wichita State when he started at second base in place of the ill Chase Dawson, Kapers' first start at a position other than catcher in his collegiate career... By season's end had played three games at second and seven games at third... Hit a team-high .378 over the final 14 games of the season after entering that stretch with a .231 average... Had multiple hits in three of the final five games, including his second three-hit performance of the year on May 18 vs. Milwaukee... Finished the season on a six-game hitting streak, his longest of the year.

2016: Appeared in 45 games, including 44 starts behind the plate for the Crusaders as a freshman...neutralized opponents' running games by throwing out 32.7 percent of would-be base stealers...batted .196, but drove in 20 runs on 29 hits...smashed his first collegiate hit on Feb. 26 at New Orleans...went 2-for-3 with a run scored at ULM (March 1)...doubled and scored in the series opener at Louisiana Tech on March 4...cracked four hits and four RBIs in eight at-bats in a four-game set at Dallas Baptist (March 9-12)...drove in a season-high three runs, and scored one, as part of a 2-for-4 afternoon at Northern Kentucky (March 20), where Valpo completed a three-game sweep of the Norse...launched the eventual game-winning solo home run that capped a six-run comeback versus Milwaukee (May 27) in an elimination game...lofted a sac fly to reach the 20-RBI plateau in Valpo's final game of the season at Wright State on May 28.

Prep: A three-year letter winner for the Brian Hurry-led Caravan...team went 103-18 in his three seasons behind the plate...helped lead Mt. Carmel to a state championship in 2013...named All-Chicago Catholic League Blue, All-Area and Closer of the Year as a junior in 2014...earned Defensive Player of the Year and All-Chicago Catholic League Blue accolades for the state runner-up team in 2015...earned High Honors in the classroom all four years (2012-15).

Personal: Scott is the son of Scott and Melissa...has a brother, Jake, and a sister, Madison...favorite food is buffalo chicken pizza...favorite movie is Dark Knight...favorite baseball team is the Chicago White Sox...favorite baseball player is Magglio Ordonez...hobbies outside of baseball include fishing and hunting...majoring in business finance.