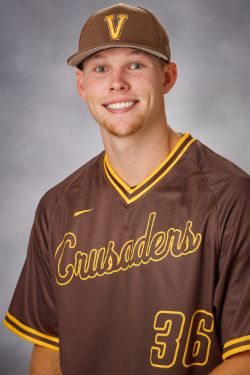 2018: Started all 53 games and batted .323 in his first season as a Crusader… Ripped seven home runs and drove in 46… Tied the program record for doubles in a single season with 23 (Kyle Muhlsteff 2010)… Led the team in league-only batting average at .342, sixth in the MVC… Was Valpo’s representative on the 2018 All-MVC First Team in the program’s first year in the conference... Ranked second in The Valley in doubles behind DBU’s Jameson Hannah while also fishing in the Top 10 in hits (71, eighth) and total bases (115, 10th)… Led the conference in doubles in league-only games with 11… Started his Valpo career in style, homering in his first Valpo plate appearance on Feb. 16 at Alabama… Had a three-double game on March 2 vs. CSUN, becoming the first Valpo player with three doubles in a game since Andrew Quinnette in 2008… Hit .769 (10-for-13) in a three-game series at Southern Illinois (April 6-8), becoming the first Crusader since 2010 to go 5-for-5 in a game…Became the first Valpo player since Quinnette in 2008 with a three-homer game as he put together the first three homer performance in the MVC in 2018 in an 18-13 win over Western Michigan on May 8. Drove in a season-high five runs in the win over the Broncos… Delivered a walk-off single to drive in two with two outs in the bottom of the ninth in a 3-2 win over Chicago State on May 15.

Personal: Graduated on honor roll from Mission Junior College… Has played baseball since he was 2 years old… Enjoys fishing… Son of Brent and Megan Billinger… Born on Feb. 6, 1996… Majoring in psychology with a minor in business.