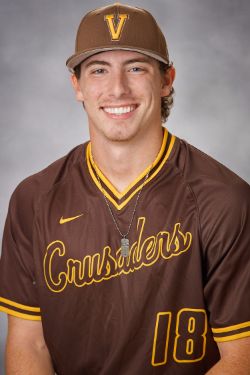 2017: Saw action in 10 games and made two starts, going 1-for-12 during his freshman season... Made the first appearance of his collegiate career on Feb. 24 at UAB... Made his first career start on April 4 at Illinois State... Picked up his first career hit in his final game of the season, May 14 vs. UIC.

Prep: Four-year letter winner at Strafford… Rookie of the Year and all-conference infielder as a freshman… First-team all-conference and first-team all-district as a sophomore, junior and senior… Led the district in all hitting categories during his sophomore campaign… Named a team captain his junior season… Cover athlete of a local sports magazine as a senior… Team MVP his senior year… Also won two varsity letters in football… Was an all-conference linebacker as a sophomore...Won the Mid-America World Series championships while playing travel baseball with the Midwest Nationals in 2016... Member of National Honor Society, received Suma Cum Laude chord and served as a Student Council representative.

Personal: Son of Robert and Christy Lutgen… Has been to seven different countries… Has a dog named after Tim Tebow… Hobbies include playing guitar and reading the Bible… Favorite food is Sushi… Favorite movie is Star Wars… Favorite professional baseball team is the St. Louis Cardinals… Favorite MLB players are Bryce Harper and Matt Carpenter… Favorite musician is Ed Sheeran… Born on Dec. 11, 1997… Majoring in economics and communications... Has a younger brother, Zak.