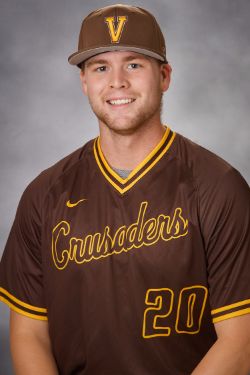 2017: Pitched in 12 games and totaled 20 innings out of the Valpo bullpen during his junior season... Struck out 10 while walking eight and went 1-1 with one save while compiling a 4.95 ERA... Did not allow an earned run in his collegiate debut, one inning vs. Penn on March 8... Saw a spike in playing time in April, when he was used in eight games.

Kaskaskia College (2015-16): Spent his freshman and sophomore seasons playing junior college baseball at Kaskaskia College in Illinois… Went 4-0 in 11 appearances while racking up 31 strikeouts over 34 2/3 innings as a sophomore… Posted a 3.08 ERA in nine starts during his first season with the Blue Devils.

Prep: Three-year letter winner at Greenfield Central High School… Named to both all-conference and all-county teams as a junior and senior… Helped lead his team to conference and sectional championships his junior season… Academic honor roll as a sophomore, junior and senior… Played travel ball with the Indiana Prospects and Indiana Irish… Finished 13th in the nation at USSSA Elite World Series in 2009 while playing with the Prospects.