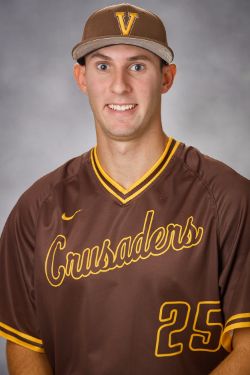 2018: Had another strong season for the Crusaders, putting together a .288 batting average and .406 on-base percentage while starting all 53 games for the second straight season… Ranked third in The Valley in runs scored with 54, tied for 14th in RBIs with 42, tied for 11th in home runs with nine, fifth in walks with 43 and third in sacrifice flies with seven… Etched his name in Valpo’s record book in several locations… Tied for fifth in program history with 54 runs scored… Ranked third in walks, one behind Spencer Mahoney (2015) for the most since 1991…Slugged the most home runs by a Valpo player since 2008 (Josh Wallace, 11) and the second-most by a Valpo player since 2002…  Named to the Brooks Wallace Award Watch List by College Baseball Foundation for an award that goes to the top shortstop in the nation… Was the only Valpo player to earn MVC Player of the Week honors in the program’s first season in the conference. Did so after hitting .700 in three games against Oklahoma and Holy Cross during the second week of the season in February.

2017: Was the only Crusader to start all 53 games... Hit a team-best .317 to go along with four home runs and 29 RBIs while posting a .412 on-base percentage... Shared the team lead in hits with Jake Hanson as each player racked up 60... Scored 36 runs, second on the team... Batted .327 in league-only games, launched three home runs and driving in 20... Started the season by clubbing his first career home run on Feb. 17 at Western Kentucky... Had three three-hit games to boost his career total to four... Two of his three-hit games came on the same day as he collected three hits in both ends of a doubleheader at Northern Kentucky on April 21... Had seven RBIs in the twinbill, four of which came in the opener... Had his hottest stretch of the season from March 24 to April 21, hitting .439 with 17 RBIs in 18 games... Finished with 20 multi-hit games, the most of any Crusader... Enjoyed a 23-game on-base streak, Valpo's longest of the season... Also reached safely in his last nine games of the year.

2016: Made 31 appearances, including 26 starts in his first season with the Crusaders...elected to the Horizon League All-Freshman Team...worked 10 walks, collected 10 RBIs, three doubles and a triple to finish the season with a .245 batting average offset by a .349 on-base percentage...picked up four hits, three runs batted in and two runs scored during the final two tilts of the Crusaders' three-game set at Jacksonville State (Feb. 20-21)...tripled as part of a 5-for-7 doubleheader versus Milwaukee on April 23.