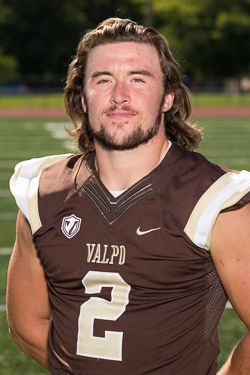 Fall 2021: Named All-PFL Honorable Mention... Earned Academic All-PFL First Team for a second straight season... Appeared in all 11 games and finished second on the team with 68 tackles while his 6.18 tackles per game ranked 19th in the PFL... Half of 68 tackles were solo stops... Notched four tackles for loss, two pass breakups, one forced fumble and one fumble recovery including a 35-yard return... Had six games with seven tackles or more including five straight from Oct. 2 to Nov. 6... Had a season-high nine tackles on two occasions – Oct. 2 vs. Marist and Nov. 6 vs. Presbyterian... Forced a fumble on Sept. 18 vs. Dartmouth... Recovered a fumble and returned it 35 yards on Nov. 13 at Butler.

Spring 2021: Earned All-PFL Second Team, Academic All-PFL First Team and the team’s Koenig Award, which is presented annually to an individual who displays outstanding sportsmanship and character… Ranked second on the team and eighth in the league with 6.8 tackles per game… Totaled 41 tackles including 15 solos during the six-game season while also accruing 2.5 tackles for loss and a pass breakup… Shared the team lead in tackles with nine including 1 ½ TFL on March 20 vs. Drake… Again tied for the team lead with nine tackles on March 27 vs. Butler… Led the team in tackles for the third straight game and had eight or more for the third consecutive contest with an eight-tackle output in the April 3 win at Drake… Member of PFL Academic Honor Roll... Started all six games.

2019: Appeared in four games in his first season on campus, retaining four years of eligibility… Had eight tackles for the season including five in his debut on Sept. 21 at Truman State… Had three tackles including a sack for a 10-yard loss on Oct. 5 vs. Drake… Member of PFL Honor Roll.

Prep (Athletic): Was a three-year starter, playing outside linebacker as a sophomore before moving to an inside linebacker / tight end as a junior and senior… Achieved all-league honors all three years, second team as a sophomore and first team as a junior and senior… Was honorable mention all-district as a junior, first team all-district as a senior, This Week News Super 25 First Team (senior), Columbus Dispatch Second Team All-Metro Team (senior), a National Football Foundation Ernie Godfrey Award recipient (conference scholar-athlete) as a senior,  the OCC Central Defensive Player of the Year in the 2018, Rivalry Series Student-Athlete Award (senior), the Most Efficient Offensive Lineman team award (junior) and the Most Efficient Defensive Player team award (senior)… Racked up 117 tackles in 11 games as a sophomore, finishing as the team’s third leading tackler… Had 103 tackles in 10 games as a junior, finishing second on the team… Was second on the team with 121 tackles in 12 games as a senior with three forced fumbles… Helped his team win conference championships his sophomore and senior years… Was a team captain as a junior and senior… Helped his team finish 9-1 in the regular season and 11-2 overall during his senior season… Was a four-year letter winner in lacrosse, earning 2018 and 2019 U.S. Lacrosse Academic All-American honors while earning second-team all-league (sophomore and junior), Most Improved Player (freshman), Sportsmanship Team Award (junior), Second Team All-Region (junior and senior), First Team All-League (senior), Broyles Leadership Team Award (senior), Team Scholar-Athlete Award (senior), the OHSAA Scholar-Athlete Award (senior) and Team MVP (senior).

Personal: Majoring in bioengineering… Birthday is Aug. 26… Son of Jeff and Leigh Ann Annis… Has two older brothers – Kyle (oldest) and Brett (middle)… Both older brothers played college football, Kyle at Butler and Brett at Division-III Capital in Columbus, Ohio… Started playing football in kindergarten… Played lacrosse for 10 years… Enjoys playing with his dog, hiking, traveling and being outside… Has skin grafts on his hand and ankle from pulling a curling iron down on himself when he was eight months old.