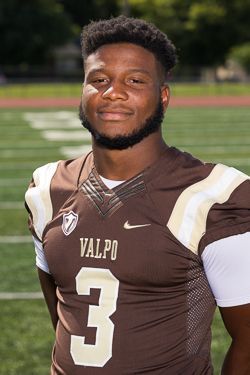 Fall 2021: Named to the All-PFL First Team for the second consecutive season while also receiving the team’s Offensive Player of the Year Award... Also named to the Phil Steele All-PFL First Team... Appeared in all 11 games and finished the season with 1,105 rushing yards, the second highest output in program history while becoming just the third 1,000-yard rusher in Valpo lore... Tied the program record for single-season rushing touchdowns with 14... Finished the season ranked ninth in program history in career rushing yards with 1,758 despite having played only 17 games with the Brown & Gold... Finished in the top 10 nationally in FCS in rushing yards per game, total rushing yards and rushing TDs... Had an 80-yard TD rush on Sept. 25 at Drake, Valpo’s longest rush against a Division-I opponent since at least 2001 and just six yards shy of the longest scoring run from scrimmage in program history, a mark established in 1949... Had five games with multiple TD runs including a pair of three TD games – Oct. 23 vs. Dayton and Nov. 6 vs. Presbyterian... Had a season-high eight receptions on Sept. 25 at Drake and a season-high 59 receiving yards on Oct. 23 vs. Dayton... Finished the season with 39 catches for 338 yards... Accrued 100 or more rushing yards in six of the 11 games including each of the season’s final three outings... Totaled 1,443 all-purpose yards for the season... Had a season-high 234 rushing yards on Nov. 6 vs. Presbyterian, the most by a Valpo player in a single game since 2012... Was recognized on ESPN’s College Football Final with a “Helmet Sticker” while also earning PFL Offensive Player of the Week from both College Sports Madness and the league office following the game against the Blue Hose.

At East Gaston High School: Four-star recruit by ESPN.com ... first four-start recruit to sign with the 49ers directly out of high school ... had over 40 offers from top programs throughout the country ... ESPN.com ranked him as high as #4 overall player in North Carolina and as the #13 running back prospect, nationally ... played with the US National Team at every age level, beginning with the 2011 u-15 squad through the 2015 u-18 team ... 3-start recruit by 247sports ... Rivals.com ranked him 15th among RB prospects ....  Ran for 2512 yards as a sophomore ... 2233 yards as a junior -- two of the Top 10 single-season rushing perfomances in Mecklenburg County history ... added 834 yards as a senior (playing in only 7 games) to finish career with 6596 career yards ... Rushed for 5762 yards in first three seasons to rank 4th all-time in county history ... attended two-time NCISAA state champ SouthLake Christian Academy before transferring to East Gaston for his senior season ... helped East Gaston to a 7-5 record and a trip to the state playoffs ... East Gaston hadn’t had a winning season since 2006 ... rushed for 131 yards and 1 TD in state playoff game ... East Gaston was 5-2 with Washington in the lineup.