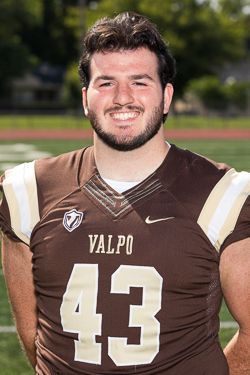 Fall 2021: Played in seven games... Had four tackles during the season including one sack... His second occurred on Nov. 13 at Butler.

2019: Did not see game action during his second season on campus… Member of PFL Honor Roll.

2018: Appeared in one game, seeing action on Oct. 27 vs. Drake… Member of the PFL Academic Honor Roll… Retained four seasons of eligibility.

Prep: Three-year letter winner under head coach Matt Kostelnik… SWC Conference Defensive Player of the Year… Earned first-team all-county, first-team all-conference and first-team all-district honors in addition to being named team MVP, a team captain and the team’s most outstanding defensive player… Led his team to an 8-4 record and a victory over the No. 1 team in the state as a junior… Also played basketball… Was a member of academic honor roll and graduated AP with honors.