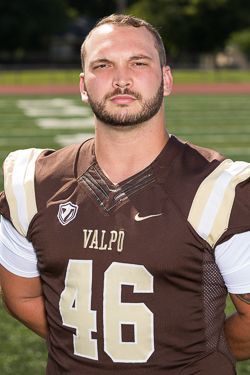 Fall 2021: Named the team’s Defensive Player of the Year... Earned All-PFL Honorable Mention... Named to the Phil Steele All-PFL Third Team... Appeared in all 11 games and recorded 50 tackles including 28 solos, 10 tackles for loss and 4.5 sacks... Also notched three fumble recoveries, two QB hurries, two forced fumbles, one blocked kick and one pass breakup... Led the PFL outright in fumble recoveries with three... Made a pair of fourth-quarter fumble recoveries on Sept. 18 vs. Dartmouth, becoming the first Valpo player with two fumble recoveries in a single game since 2005... Was named the College Sports Madness PFL Defensive Player of the Week following the game against Dartmouth... Blocked Drake’s potential game-tying field goal attempt with no time on the clock to seal Valpo’s 24-21 victory on Sept. 25 in Des Moines, earning PFL Special Teams Player of the honors... Had a season-high 12 tackles on Oct. 30 at San Diego including 4.5 tackles for loss, tied for the 14th most in a single game in the FCS nation... Forced fumbles on Oct. 30 at San Diego and Nov. 20 vs. Morehead State and recovered a fumble in the Nov. 13 win at Butler.

Spring 2021: Played in all six games and made two starts… Had 16 tackles including 4.5 tackles for loss and a team-high three sacks… Had four tackles in the March 20 game vs. Drake… Accrued five tackles including 2.5 sacks on April 3 at Drake… His 2.5 sacks in the April 3 game totaled 19 yards as he notched the most sacks by a Valpo player in a single game since 2015… Member of PFL Academic Honor Roll… Received Valparaiso University Presidential Academic Honors.