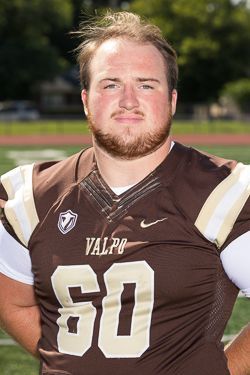 Spring 2021: Appeared in three games… Made his collegiate debut on March 27 vs. Butler before also seeing action on April 10 at Morehead State and April 17 vs. San Diego… Member of PFL Academic Honor Roll.

Prep: Member of the varsity team for four years and won three letters… Team went 8-3, was the Suburban League runner-up and qualified for the state playoffs during his freshman season in 2016… Squad won back-to-back Suburban League championships in 2017 and 2018, qualifying for the state playoffs in both his junior and senior seasons while posting a combined 22-2 record… Team was also the regional runner-up during his sophomore year… As a senior, his team went 7-3 and was the Suburban League runner-up… Earned First Team All-Suburban League honors as a junior and senior… Accolades during his senior season included Albie Litwak Award, Team Offensive Lineman of the Year, 1590 WAKR Student-Athlete of the Week and Thanksgiving Senior All-Star Game starter and captain… 2018 Coaches’ Award Recipient as a junior and 2016 freshman football MVP... Also competed in freshman basketball and three seasons of track & field… Was a two-year captain in football and track & field and one-year captain in basketball… Posted a perfect score on the science section of the ACT... Earned academic all-league honors by posting a GPA of 3.5 or higher all four years… Served as Senior Class President, a member of National Honor Society (three years) and a member of student council (all four years)… Was a National Merit Scholarship contestant as a senior.