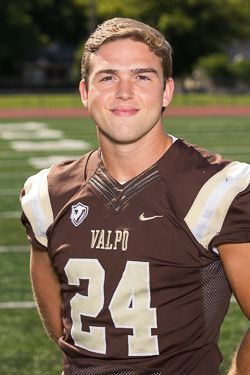 Fall 2021: Earned All-PFL Honorable Mention and Phil Steele All-PFL Fourth Team... Led the team with 71 tackles including 42 solos... Also posted 3.5 tackles for loss, 1.5 sacks, two pass breakups, four QB hurries, one forced fumble, one blocked kick and one safety... Sacked the Dartmouth quarterback in the end zone for a safety on Sept. 18 at Brown Field, Valpo’s first safety since 2006 and first credited to an individual Valpo player in over two decades... Blocked a field-goal attempt on Oct. 2 vs. Marist... Had a pair of double-figure tackle performances – 11 on Oct. 30 at San Diego and a season-high 13 on Nov. 6 vs. Presbyterian... Recorded nine tackles or more in four of the season’s final five games... Ranked 17th in the PFL in tackles per game at 6.45.

Spring 2021: Played in all six games and made four starts… Had 23 tackles during the six-game season and posted 3.5 tackles for loss, one sack, one pass breakup and three QB hurries… Had a season-high nine tackles including four solos and 1.5 TFL in the March 20 game vs. Drake, sharing the team lead in tackles in that contest…  Recorded six tackles including a sack in the April 17 season finale vs. San Diego… Member of PFL Academic Honor Roll.

2019: Finished third on the team with 69 tackles and had the most tackles among non-seniors… Had two tackles for loss, a pass breakup, a QB hurry, a fumble recovery, a forced fumble and a blocked kick… His 5.8 tackles per game ranked 21st in the league and fourth among freshmen… Had a season-high 11 tackles on two occasions, Sept. 28 vs. Charleston and Oct. 26 vs. Stetson… Blocked a Stetson field-goal try in the Oct. 26 game against the Hatters… Had a forced fumble and fumble recovery on Nov. 16 at Butler… Member of PFL Honor Roll… Member of PFL Honor Roll.

2018: Appeared in four games as a true freshman and made one tackle… Saw action on Sept. 22 vs. Truman State, Sept. 29 vs. Davidson, Oct. 27 vs. Drake and Nov. 3 at Marist… Made his first career tackle on Nov. 3 against the Red Foxes… Retained four seasons of eligibility.