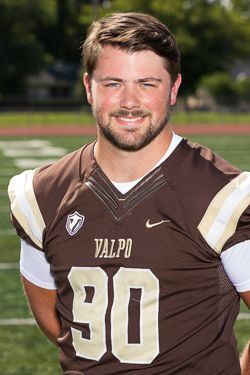 Fall 2021: Played in four games... Made his collegiate debut on Sept. 4 at Indiana Wesleyan... Made his first career tackle on Sept. 11 at North Dakota State... Also saw action on Nov. 6 vs. Presbyterian and Nov. 13 at Butler.

Prep: Three-year varsity letter winner… First team all-conference recipient as a junior and senior… Collected team defensive MVP honors during his junior and senior seasons… Best individual performance was the last home game of his senior year, when he had 22 tackles, one TFL, two blocked field goals and a blocked punt against Ashwaubenon… Also played lacrosse for three years and wrestled for one… Served as a two-year team captain in football and also spent one season as a lacrosse captain… Made the honor roll during the second semester of his junior year… Also received an academic letter as a junior.