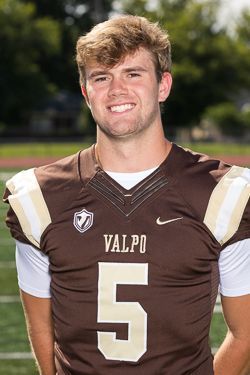 Fall 2021: Named to the Academic All-PFL Second Team... Saw action in all 11 games... Completed 106 passes for 1,299 yards and nine touchdowns while also rushing for one score... Had a season-high 19 completions in each of the season’s final two games – Nov. 13 at Butler and Nov. 20 vs. Morehead State... Passed for a season-high 241 yards and three touchdowns in the Nov. 13 game at Butler while also notching his first rushing score of the season.

Spring 2021: Appeared in three games including one start… Went 21-of-44 through the air for 304 passing yards and one touchdown… Made his season debut on March 20 vs. Drake and completed four of his nine pass attempts… Took over at quarterback midway through the April 10 game at Morehead State and nearly led the team to its biggest rally since 1995, going 7-of-14 through the air for 77 yards… Made his first career start on April 17 vs. San Diego and led Valpo to an upset victory over a team that was receiving votes nationally, the program’s first win over the Toreros since 2003 and just San Diego’s second league loss in a 42-game span… His first career TD pass was a memorable one as he found Braden Contreras for a 9-yard, go-ahead score that put Valpo ahead 20-19 with 21 seconds on the clock in the game against the Toreros… Finished that contest 10-of-21 for 193 yards including a 45-yard heave to Holden Hodge, the team’s longest pass of the season… Member of PFL Academic Honor Roll… Valparaiso University Presidential Academic Honors Award.

Personal: Son of Dave and Jeri Nimz… Has one sister, Alyssa, and two pets – golden retriever Rylee and cat Lizzie… Majoring in business (finance and analytics)… Born on Nov. 12, 1999.