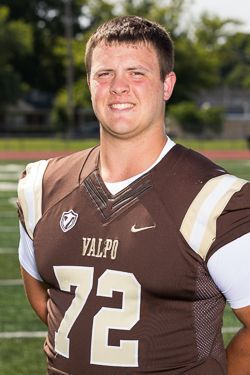 Prep: Was a varsity co-captain in 2018 while earning academic all-state and first-team all-area honors… Also received SWSC all-conference and earned a scholar-athlete award given to the player with the highest GPA on his varsity football team… Team reached the 2017 IHSA football Class 7A quarterfinals in 2017… Received a scholar-athlete award in 2016 that goes to the player with the highest GPA on the sophomore football team… Played six years of baseball including two in high school… Completed community service at a local food pantry and with Feed My Starving Children… Helped youth football teams with summer camps… Received numerous academic honors including National Honor Society, AP scholar, Illinois state scholar, magna cum laude and high honor roll.

Personal: Majoring in electrical engineering… Born on March 10… Son of Wayne and Candi Parrish… Has one sister, Caitlyn… Enjoys watching Chicago Bears games on Sundays either from home or at the game… Goes on a fishing trip every Thanksgiving to Branson, Mo. and stays at Lazy Valley Resort… Enjoys hiking in Arizona when on vacation to visit family there… Tutors other engineering students at Valpo’s Hesse Learning Resource Center… Cuts grass for five people and has done so for over four years.