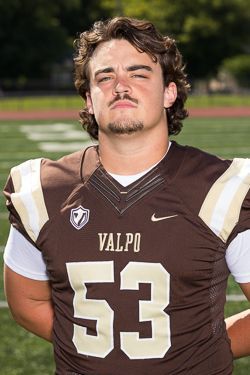 Fall 2021: Saw action in all 11 games... Totaled 11 tackles including three solos... Had one sack and one fumble recovery... Notched a sack for a loss of seven on Oct. 2 vs. Marist... Recovered a fumble on Oct. 9 at St. Thomas... Had a season-high three tackles in the Oct. 9 game against the Tommies.

Spring 2021: Competed in three games… Made his collegiate debut on March 20 vs. Drake… Notched a sack and blocked a field-goal attempt on April 10 at Morehead State… Member of PFL Academic Honor Roll.

Prep: Three-year varsity letter winner… Served as a team captain during his senior season… Helped his team to a 37-5 record during his career, part of the winningest class in school history… Had two sacks, six tackles and an interception in the second game of the 2019 season… Chosen to represent the West in the PA East/West All-Star Game as a senior... Second team all-conference and first team CTA all-conference as a senior... 6A conference leader in sacks as a senior with 11.5... 2019 6A conference runner-up, 2018 6A conference champion and PIAA state semifinalist, 2017 6A conference and PIAA state champion that had undefeated record and ranked ninth nationally... Also competed in track & field as a senior and junior… Member of the honor roll throughout high school.

Personal: Majoring in mechanical engineering… Son of Allison and Travis Miller… Has one younger sister, Claire.