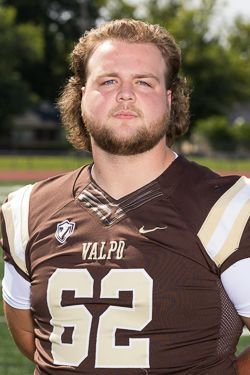 Spring 2021: Appeared in all six games and made three starts on Valpo’s offensive line… Made his collegiate debut in the March 13 season opener at Butler… Started each of the final two games including his first career start on April 10 at Morehead State… Notched a tackle in the April 10 game against the Eagles… Member of PFL Academic Honor Roll.

Prep: Four-year varsity letter winner… Served as a team captain, earned scholar-athlete honors and was an honors student… Helped his team to an impressive 56-6 record throughout his career… Contributed to his squad’s semifinal win in seven overtimes against King’s Mountain High School… Also played four years of rugby and was a team captain in 2018.

Personal: Majoring in sport management… Son of Tonya and Douglas… Has two brothers, Ben and Evan.