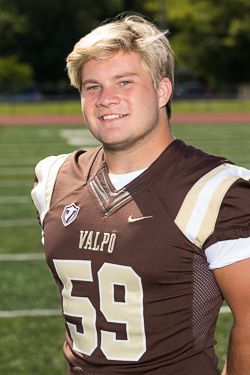 Fall 2021: Did not see game action... Named the Scout Team Defensive Player of the Year.

Prep: Three-year varsity letter winner… Also lettered in track & field… Earned his team’s Coaches’ Award, was a game team captain and a member of the PLC, where he was honored with a leadership role… Member of the 500, 1000 and 1300 pound clubs… Named 6A First Team Defensive Lineman by Arizona Varsity following his senior season... Was a finalist for the 6A Defensive Lineman of the Year in the state of Arizona... Set the 2019 Arizona max bench press record for ages 16-17 in the 220-pound class… Earned the 2019 NFL Cardinals Corey Peters Lineman MVP Award… Was named Arizona Varsity Rivals “Beast of the Week” on Aug. 28, 2019 and was the 2019 Defensive Lineman of the Year at Sandra Day O’Connor… Had 8.5 sacks, a fumble recovery, 43 tackles, 13 TFL and a blocked PAT during his senior season in 2019… Thrived academically as well, serving as a member of National Honor Society as a junior and senior, earning the HOSA Award as a freshman and taking school Student of the Month honors as a sophomore and senior… Received the varsity football honor student high GPA award in each of his final three prep seasons and was on the honor roll every semester of high school… Received Academic All-Star of the Week from the Arizona Republic/AzCentral Sports... Graduated with a 4.0 GPA.