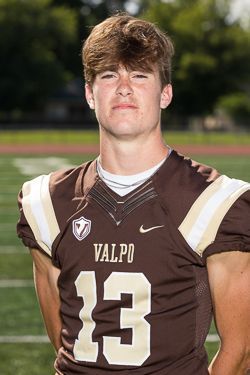 Fall 2021: Played in nine games and totaled 19 catches for 316 yards and one touchdown... Caught a 35-yard touchdown pass on Oct. 9 at St. Thomas... Had a season-high 118 receiving yards on four receptions on Oct. 23 vs. Dayton including as season-long 42-yard reception.

Spring 2021: Appeared in all six games and made four starts… Made his first career reception and finished with two grabs for 20 yards on March 20 vs. Drake… Had a season-high 69 receiving yards on three catches including his first career touchdown reception on April 17 vs. San Diego. The TD was a memorable one as the 9-yard toss from Ben Nimz accounted for the go-ahead score that put Valpo up 20-19 with 21 seconds on the clock in the game against the Toreros, an eventual upset over a team receiving votes nationally… Named the team’s Offensive Player of the Week for Week 6 vs. San Diego.

Personal: Majoring in marketing… Son of Kelly and Steve Contreras… Has two younger brothers, Carter and Riley, and one younger sister, Grayson… Father Steve played football at Amherst from 1995-1999.