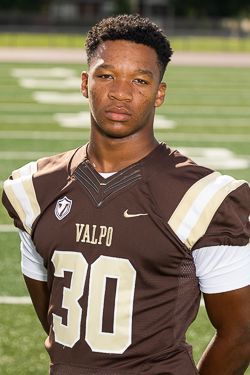 Spring 2021: Appeared in four games… Had one carry for five yards in his collegiate debut on March 13 at Butler… Totaled three carries for 10 yards during the season.

Prep: Two-year varsity letter winner… Rushed for 1,626 yards and 27 touchdowns while hauling in 24 receptions for 278 yards and two scores… Helped his team to a 7-4 record… Also competed in four years of basketball and track & field… Served as a team captain in all three sports including a two-year captain on the hardwood… Was an “A” honor roll student.

Personal: Majoring in civil engineering… Son of Tiffany and Jerron Lane… Has one sister, Davina Lane, who is a member of the track & field team Class of 2021 at George Mason University… Father Jerron played football (’93, ’94) and basketball (’92) at Muhlenberg College.