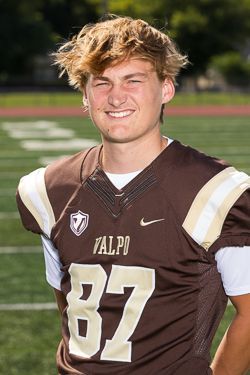 Fall 2021: Named to the All-PFL First Team for a second straight season... Named to Phil Steele All-PFL First Team... Saw action in 10 games and went 12-of-16 on field-goal attempts, 32-of-33 on PATs and averaged 54.0 yards per kickoff on 50 attempts while booting seven touchbacks... Finished tied for second in single-season program history with 12 made field goals... Ranked fifth in the program record book with 32 made PATs... Led the PFL in both field-goal percentage and made field goals per game... Named the PFL Special Teams Player of the Week after breaking a single-game program record with eight made PATs in the Nov. 6 win over Presbyterian. That record was set in 1984 and was matched six times thereafter... Had a streak of 40 straight made PATs without a miss that ended on Nov. 13 at Butler, when his lone miss of the season came from added distance after a 15-yard penalty. His streak was nine shy of tying the program record for consecutive made PATs... Made two field goals in a game on three occasions – Sept. 18 vs. Dartmouth, Oct. 9 at St. Thomas and Nov. 13 at Butler... Made a season-long 45 yard field goal on Nov. 13 at Butler.

Spring 2021: Played in all six games as the team’s starting kicker… Earned All-PFL First Team recognition and was named the squad’s Most Improved Player… Went 7-of-8 on field-goal tries and 13-of-13 on PATs, totaling 34 points… Had 25 kickoffs for 1,289 yards, an average of 51.6 yards per kickoff… Booted two touchbacks… Ranked fifth in the league in scoring at 5.7 points per game, second in field goals per game at 1.17, first in made PATs without a miss at 13-for-13 and first in field-goal percentage at 87.5… Boasted Valpo’s best single-season field-goal percentage in over 15 years… His season-long 49-yard field goal came at a critical time as it represented the first points of Valpo’s eventual 10-7 win at Drake. That kick was the longest made field goal by any PFL player all season… Had multiple made field goals on two occasions – March 20 vs. Drake and April 17 vs. San Diego… Had a season-high four extra points on March 27 vs. Butler… Named the team’s Special Teams Player of the Week for Week 1 at Butler.