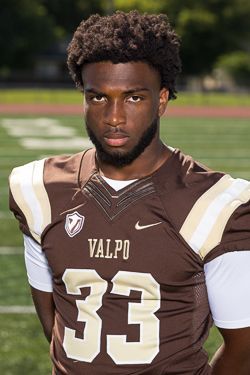 Prep: Three-year varsity letter winner… Earned First Team All-Conference and Academic All-State as a senior after helping his team to a 9-0 record, the first undefeated season in program history… Helped his team garner a conference title his senior season… Led the conference in touchdowns in 2018 despite playing in only five games… His school’s football program was canceled/shut down for one season during his junior year due to a lack of interest from the school… Ran track for three years (4x100 and 4x200) and was a two-year varsity letter winner… Taught about plastic pollution to grammar school students in 2016… Served as an assistant coach for an old grammar school club football team (Hyde Park Spartans)... Was a 2019 Principal Scholar and earned honor roll all four years… Was an Illinois State Scholar and graduated with a 4.6 GPA while earning Academic All-State in 2018.

Personal: Son of Bilqis Jacobs-El and Timashian Mitchell… Has a younger brother, Alim Mitchell… Born on Oct. 9… Majoring in mechanical engineering… Hobbies and interests include watching anime, building computers, seeing movies and playing video games… Favorite football players are Jamal Adams and Ray Lewis. He often watches their highlights before workouts or games… Has been playing football since age 5… Started kindergarten at age 4 so is young for his year in college… Is the first member of his family to compete in a Division-I college sport… Anime is a big motivator when he prepares to compete in sports.