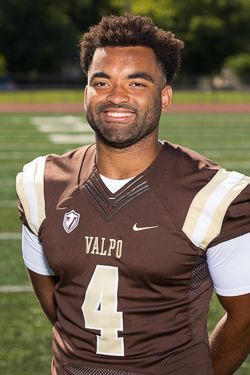 Fall 2021: Named All-PFL Second Team... Named to Phil Steele All-PFL First Team... Played in all 11 games and finished with 40 tackles, half of which were solos... Notched 15 tackles for loss totaling 56 yards... Recorded 6.5 sacks for 38 yards... Was credited with a QB hurry and a pair of pass breakups... Ranked eighth in the PFL in sacks per game (0.59) and third in TFL per game (1.36)... Tied for the fifth most TFL in a single season in program history... Had five TFL in a single game vs. Presbyterian, tied for fifth most in the FCS nation in a single game during the season... Also had 5.0 TFL vs. Morehead State... Had four sacks in a single game on Nov. 6 vs. Presbyterian... Finished with a season-high 11 tackles in the Nov. 20 season finale vs. Morehead State and had nine tackles or more in each of the final two home games.

Spring 2021: Received All-PFL Honorable Mention… Started all six games… Had 20 tackles including a team-high 5.5 tackles for loss… Also had two sacks and one fumble recovery… Had a sack and a fumble recovery in the March 27 game vs. Butler… Totaled a season-high six tackles on April 10 at Morehead State, earning the team’s Defensive Player of the Week distinction… Had 1.5 tackles for loss in each of the final two games of the season, April 10 at Morehead State and April 17 vs. San Diego.

2019: Played in all 12 games and earned All-PFL Honorable Mention in his first season on campus… Finished tied for sixth in the PFL with 3.5 sacks… Had six tackles for loss totaling 31 yards… Racked up 31 tackles including 14 solos… Had the first fumble recovery of his Valpo career on Oct. 26 vs. Stetson… Had a season-high five tackles on Nov. 2 at Davidson.

2018 (East Tennessee State): Appeared in one game as a redshirt freshman, seeing action against Gardner Webb… Named to the Southern Conference Honor Roll and to the Dean’s List.

2017 (East Tennessee State): Did not see action as a true freshman… Retained four years of eligibility.

Prep: Was a four-year letter winner under head coach George Quarles at Maryville High School… Combined for 132 tackles, 27 TFL and 12 sacks over his junior and senior seasons… Led the team in TFL and sacks during his senior campaign… Named All-Region 1-6A & PrepExtra Second Team Defense in 2016… Played in the Toyota East vs. West All-Star Game in 2016 and Kentucky/Tennessee Border Bowl in 2017… Played on a state championship team at Alcoa High School in 2013… Was a state runner-up at Alcoa in 2014 and Maryville in 2015… Also competed in one season of track & field… Was named to the A&B honor roll during each prep season.

Personal: Majoring in civil engineering… Birthday is Sept. 4… Son of Lawana and Elliott Purty… Has an older sister, Ahmaya.