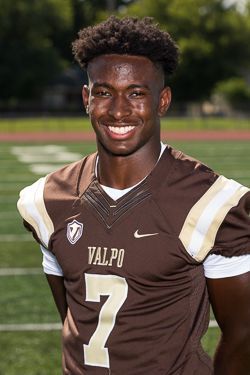 Prep: Four-year letter winner… Accolades include first team all-district WR, second team all-region wide receiver, honorable mention CB and Roanoke Times player to watch list as a sophomore, junior and senior… Helped his team to a 41-13 record throughout his high school tenure… Best individual performance featured 93 receiving yards, one interception and four tackles… Also competed in basketball all four years and three years of track & field… Was a team captain in both basketball and football… Was a state and national qualifier in DECA.

Personal: Majoring in marketing… Son of Nicole and Kendrick Gholston… Has one sister, Adiah, who ran track at Virginia Tech… Father Kendrick played football at Louisville before going on to play in the NFL with the Cowboys, Lions and Rams… Kendrick is fourth on Louisville’s all-time sacks list… Has lived in seven states (North Carolina, Virginia, Texas, New Jersey, Georgia, Missouri, Kentucky)… Enjoys playing golf… Volunteers at Roanoke Rescue Mission, a shelter in Virginia… Served as his school’s class president as a junior while also filling the role of Habitat for Humanity president and being active in various clubs… His father didn’t let him play football his first year living in Texas because it was such a tough environment… Will challenge anyone in “Words with Friends…” Played basketball before he played football, and his dad was his coach until middle school.