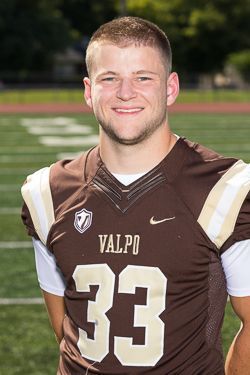 Fall 2021: Earned All-PFL First Team status for a second consecutive season... Named to Phil Steele All-PFL First Team... One of 50 players nationally named to the FCS ADA Academic All-Star Team... Selected to compete in the FCS Bowl and Tropical Bowl USA... Named to the FCS National Punter of the Year Preseason Watch List... Named the Special Teams MVP of the FCS Bowl after booting six punts for 301 yards, averaging 50.2 yards per punt including a long of 63. Six of his attempts in the FCS all-star showcase went for 47 yards or more and three of them traveled at least 50 yards... Averaged 43.2 yards per punt, a mark that ranked third in single-season program history, led the PFL and ranked 16th nationally in FCS.... Played in all 11 games and totaled 56 punts for 2,421 yards while booting 13 punts 50+ yards and pinning the opponent inside the 20 on 21 occasions... Had a 17-yard run on Sept. 11 at North Dakota State... Averaged a season-high 53.2 yards per punt including a season-long 63 yarder on Oct. 9 at St. Thomas, a performance that would earn him STATS FCS National Player of the Week honorable mention and PFL Special Teams Player of the Week... Again received PFL Special Teams Player of the Week recognition after averaging 48.7 yards per punt including a season-high-tying 63 yarder on Oct. 30 at San Diego.