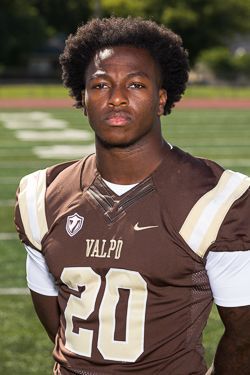 Fall 2021: Played in eight games and totaled 301 rushing yards on 65 carries... Ran four six touchdowns... Had six receptions for 19 yards and one kickoff return for 16 yards to finish the season with 336 all-purpose yards... Ran for a season-high 72 yards in the Nov. 20 season finale vs. Morehead State... Rushed for four touchdowns vs. Presbyterian, tying a single-game program record.

2020-21 (Massachusetts): Named to the dean’s list during the spring semester… Did not see game action.

2018 (Massachusetts): Played in four games as a contributor at running back and on special teams… Totaled 11 yards on five attempts carrying the ball.

2017 (Massachusetts): Averaged 7.5 yards per carry with 15 rushing attempts covering 113 yards, including one touchdown… Also caught three passes for 43 yards, including one touchdown… Had nine tackles on special teams, including four solo stops… Caught a pair of passes for 33 yards and tallied a 23-yard rush against Old Dominion (9/9)… Scored on a 10-yard reception at Temple (9/15)… Posted nine carries covering 49 yards in a win over Georgia Southern (10/21)… Scored his first collegiate rushing touchdown on a goal-line carry during the double-overtime victory over Appalachian State (10/28)… Notched his season-best of three tackles in the win over Maine (11/11) and followed with two solo stops at BYU (11/18).